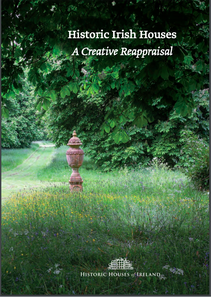 ​In 2018 Harriet began a development role with Historic Houses of Ireland, www.ihh.ie, the association for private owners of heritage in Ireland.  Her remit was to look at opportunities to work with the high-end tourism sector, while bringing in more members, re-developing the website and creating a social media presence.

Thanks to Creative Ireland (an Irish Government body) the HHI received funding to look at the Big House as a ‘Creative Space’ and reframe the image of country houses in Ireland by showing the amount of cultural and other activity that had already been happening at individual houses, and to look at what might work in the future to make historic houses sustainable and viable by ensuring public access to areas on the properties. The idea was also to cross-pollinate ideas that were discovered to be working well at one house to another, as well as to have houses collaborate. The survey was conducted by Harriet with 75 houses as both a free-flow conversation during which ideas rose to the surface and a questionnaire to collect data that would be valuable to show statistics and trends.

The resulting report was published in November 2020.
www.creativeireland.gov.ie/en/publication/historic-irish-house-a-creative-reappraisal

Ireland is an example of a country where historical attitudes towards the Big House have been changing rapidly in the last few decades. The perception has shifted, and there is now an enormous interest in houses in a way there never was.  This report posits that even smaller manor-type houses have outbuildings and beautiful surroundings that allow the main building to serve as a backdrop for multifold activities. These can operate from the yard that usually lies behind the house and/or the walled garden, which can act as hubs.  This research could be applied in other countries where country houses need to be 'reclaimed' in the public consciousness, and/or the methodology adapted where appropriate.

In the meantime Harriet is working with various houses, both public and private to put some of the ideas into practice.